The History of Authentic Thai Massage

History tells us that Thai Massage has been founded and developed by the legendary Shivago Komarpa, a physician from over 2500 years ago. He was from northern India and was a friend and personal physician of the Buddha.

Komarpa also worked with the Magadha King Bimbasara and the Buddhist nuns and monks called the Sangha. Though there are a combination of influences for Thai medicine from Chinese, Indian and Southeast Asian culture, credit is giving mostly to Dr. Komarpa.

For centuries, Thailand was under the cultural influence of neighbouring countries. Thai massage, which united in itself the best medical practices of various countries, has become the result of such influence.

One of the most significant moment of Siam’s history (former Thailand name), was the appearance of Buddhism that came from India about 2500 years ago. Buddhism brought not only religious teachings, but also doctors who practiced Ayurveda and yoga masters. Ayurveda and yoga and became the basis of the Thai health-system which has been used till today. Apart from massage, these practices include herbs and other different preparations of natural ingredients.

Most of the recorded history of Thai massage was lost in 1767 during the Burmese attack in Ayutthaya. There were records that survived and were inscribed in in the walls of the monastery Wat Po, which is located in Bangkok. These stones, which are diagrams of bioactive points and stripes indicating the power lines, can be seen today. Due to the fact that the monastery Wat Po have been keeping secrets of Thai medicine all the time, today this is the most influential school of Thai massage.

Thai massage differs from traditional massage by its use of body’s energy line system, known as Sen Lines. There is a basic theory that there are seventy-two thousand Sen lines that are also called energy lines that line the frame of the physical body. The Sen Lines correspond with the Chinese acupuncture medications and the ancient Ayurvedic medicine practice from India. 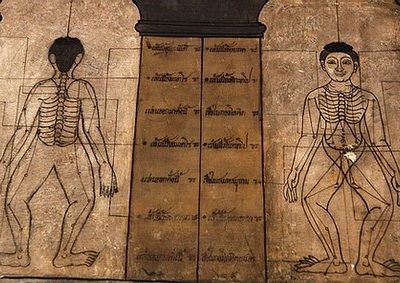 to make an appointment call: